Durarara!! (デュラララ!! Dyurarara!!?), often romanized as DRRR!! in Japan, is a Japanese light novel series written by Ryohgo Narita, with illustrations by Suzuhito Yasuda, that has also been adapted in to a Japanese anime series. As of February 2012, ten volumes have been published by ASCII Media Works under their Dengeki Bunko imprint. A manga adaptation by Akiyo Satorigi started serialization in the shōnen manga magazine Monthly GFantasy on April 18, 2009. An anime adaptation began airing in Japan in January 2010.[1] The series is about a dullahan working as an underworld courier in Ikebukuro, Japan, an internet-based anonymous gang called The Dollars, and the chaos that unfolds around the most dangerous people in Ikebukuro. A game based on the series for the PlayStation Portable was released on September 22, 2010.

The series is set in modern day Ikebukuro, Japan. The story starts when Mikado Ryūgamine, a young boy who longs for the exciting life of the big city, moves to Ikebukuro at the invitation of his childhood friend Masaomi Kida, who he hasn't seen since he was young, to attend Raira Academy with him. After first meeting Masaomi at the train station, they both set out at night to the streets of Ikebukuro. Masaomi warns him about people he doesn't want to cross in the city: like a violent and superhumanly strong man, Shizuo Heiwajima, an information broker, Izaya Orihara, and a mysterious gang known as "The Dollars." After running into some of the side characters, Mikado witnesses a local legend called the "Black Rider", who rides around Ikebukuro on a black bike that occasionally brays like a horse, and who is also rumored to have no head under its helmet. The narrative follows all of the characters equally, showing how their lives intersect, creating a greater plotline from what each character knows about a common incident. It has 9 main characters. The leaders of both gangs are high school students. 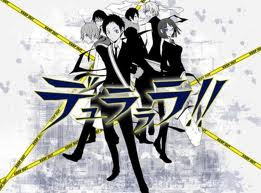 Fairy Tail (フェアリーテイル Fearī Teiru?, romanized as FAIRY TAIL in Japan) is a Japanesemanga series written and illustrated by Hiro Mashima. It has been serialized in Weekly Shōnen Magazine since August 23, 2006, and has been published by Kodansha in 29 tankōbon volumes as of October 2011. An ongoing anime produced by A-1 Pictures and Satelight was released in Japan on October 12, 2009,[1] and has spawned two original video animations. The series follows the adventures of Lucy Heartfilia, a teenage wizard who joins the titular wizards' guild and teams up with fellow guild member Natsu Dragneel as he searches for the dragon Igneel. 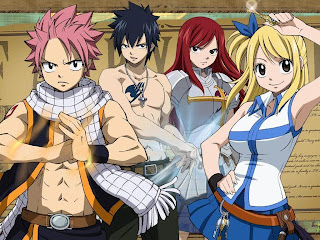 The series was originally licensed for an English language release in North America by Del Rey Manga, which began releasing the individual volumes on March 25, 2008 and ended its licensing with the 12th volume release on September 28, 2010. The series was taken over by Kodansha USA Publishing, who continued its North American release.[2] The anime adaptation was originally licensed by Animax Asia, which began airing the series with a Hong Kong-based English dub on September 30, 2010, but dropped the series after airing its 48th episode on December 6 the same year.[3] It has since been licensed by Funimation Entertainment for distribution in North America.[4

See also: List of Fairy Tail characters
A 17-year-old celestial wizard named Lucy Heartfilia runs away from home to join Fairy Tail, a rambunctious wizards' guild whose members are infamous for their overly destructive antics. Along the way, she meets Natsu Dragneel, a boy who is traveling the land of Fiore together with his partner Happy, a talking cat, in search of his foster parent, a dragon named Igneel who had disappeared without a trace seven years prior. Shortly after their meeting, Lucy is abducted by a wizard claiming to be the famous Salamander of Fairy Tail. Natsu rescues Lucy and reveals himself to be the real Salamander and a Dragon Slayer, a wizard with the abilities of a dragon. Natsu offers membership to Fairy Tail for Lucy, which she accepts.
Lucy forms a team together with Natsu and Happy, as well as Gray Fullbuster, an ice wizard with a habit of stripping, and Erza Scarlet, an armored female wizard. The five go on missions for their guild together and battle a wide variety of villains, which include: multiple dark (illegal) guilds led by an organization called Baram Alliance; demons created by an ancient, evil wizard namedZeref; Phantom Lord, a rival guild to Fairy Tail; Erza's former childhood friend Jellal Fernandes; and Laxus Dreyar, the renegade grandson of Fairy Tail's master, Makarov. The Fairy Tail guild also sees the inclusion of two other Dragon Slayers—Gajeel Redfox from the Phantom Lord guild and Wendy Marvell from the Caitshelter guild—who were both raised by dragons (Metalicana and Grandeeney, respectively) that disappeared on the same day as Igneel.
Later on in the series, several members of Fairy Tail, including Natsu, Lucy, and their friends, gather for an annually held examination on their guild's sacred ground of Tenrou Island, where they discover that Zeref has been living on the island and is being sought out by one of the guilds of the Baram Alliance, Grimoire Heart. Though Fairy Tail defeats Grimoire Heart, the incident summons the black dragon Acnologia, which attacks the island. However, everyone on the island is protected by the spirit of Fairy Tail's founding member, Mavis Vermillion, and reappears seven years later.

Main article: List of Fairy Tail chapters
Fairy Tail is written and illustrated by Hiro Mashima, the Fairy Tail manga premiered in Weekly Shōnen Magazine in the August 23, 2006 issue. The series is still ongoing, with 250 chapters serialized As of June 2011. The individual chapters are collected and published in tankōbon volumes by Kodansha, which released the first volume on December 15, 2006. As of October 2011, 29 volumes have been released in Japan. A special in Weekly Shōnen Magazine featured a crossover with Flunk Punk Rumble, released in 2008. The official fanbook, Fairy Tail+, was released on May 17, 2010 in Japan.
The series was licensed for an English-language release in North America by Del Rey Manga.[5] The company released the first volume of the series on March 25, 2008 and continued until the release of the 12th volume in September 2010. Kodansha Comics USA took over the series and continued the release on May 2011.[2]
An anime adaptation co-produced by A-1 Pictures and Satelight, and directed by Shinji Ishihira premiered on October 12, 2009.[1] As of November 2, 2011, 22 DVD volumes containing four episodes each have been released, with two more scheduled to be released on December 7, 2011 and January 6, 2012, respectively.[6] Animax Asia started broadcasting the English dubbed version of the series on September 30, 2010, but due to lack of time, it was canceled after the 48th episode. It is still airing in some parts of Asia and in the Philippines, where they initially used the Hong Kong based English dub but are now using the original Japanese audio. The anime series won Animax Asia's "Anime Of The Year" award. On January 18, 2011, British anime distributor Manga Entertainment announced on Twitter that the company would release the anime series in bilingual format at the end of the year.[7] On April 21, 2011, they had confirmed that the first volume with 12 episodes would be released in February 2012;[8] however, they later announced that the first volume would be released on March 5, 2012. At the 2011 Sakura-Con, North American anime distributor Funimation Entertainment announced that they had acquired the first 48 episodes of the ongoing series.[4]
The series made its North American television debut on November 22, 2011 on the Funimation Channel.[9]

Kodansha announced on October 12, 2011 that an anime film adaptation of Fairy Tail will be released on August 18, 2012.[12] It will be directed by Masaya Fujimori, and its screenplay will be written by anime staff writer Masashi Sogo. Series creator Hiro Mashima will also be involved as the film's story planner and designer for guest characters appearing in the film.[13]

An action video game for the PlayStation Portable titled Fairy Tail: Portable Guild was unveiled at the 2009 Tokyo Game Show.[14][15] The game was developed by Konami and was released on June 3, 2010. A sequel to Portable Guild was released on March 10, 2011, also on the PlayStation Portable. Two fighting games, Fairy Tail Gekitō! Madōshi Kessen (FAIRY TAIL 激闘! 魔道士決戦?) and Fairy Tail Gekitotsu! Kardia Daiseidō (FAIRY TAIL 激突! カルディア大聖堂?), were released for the Nintendo DS on July 22, 2010 and April 21, 2011, respectively.[16]

The music for the anime was composed and arranged by Yasuharu Takanashi. As of July 2011, three original soundtrack CDs have been released, containing music from the anime: the first soundtrack volume was released on January 6, 2010,[17] the second volume on July 7, 2010,[18] and the third volume on July 6, 2011.[19] Character song singles were also produced; the first single, featuring Tetsuya Kakihara(Natsu) and Yuichi Nakamura (Gray) was released on February 17,[20] while the second single, featuring Aya Hirano (Lucy) and Rie Kugimiya(Happy), was released on March 3, 2010.[21] Another character song album, entitled "Eternal Fellows," was released announced on April 27, 2011. Two of the songs from the album, performed by anime cast members Tetsuya Kakihara (Natsu) and Aya Hirano (Lucy), were used for both OVAs as the opening and ending themes, respectively. Other songs on the volume are performed by Yuichi Nakamura (Gray), Sayaka Ohara (Erza), Satomi Satō (Wendy), Wataru Hatano (Gajeel), and a duet by Rie Kugimiya (Happy) and Yui Horie (Charle).[22]

In Japan, the fifth volume of Fairy Tail was ranked seventh in a list of the top ten manga, and the series once again placed seventh after the release of the sixth volume.[23] About.com's Deb Aoki lists Fairy Tail as the best shōnen manga of 2008.[24] It also won the 2009 Kodansha Manga Award for shōnen manga.[25] It has also won the Society for the Promotion of Japanese Animation's Industry Award in 2009 for best comedy manga.[26] What Time Is It ?